Augustine: Homily for the Feast of the Transfiguration

ON THE WORDS of the gospel, Matt 17:1, “After six days Jesus taketh with Him Peter, and James, and John his brother,” etc.

1. We must now look into and treat of that vision which the Lord showed on the mount. For it is this of which He had said, “Verily I say unto you, there be some standing here which shall not taste of death till they see the Son of Man in His Kingdom” (Matt 16:28). Then began the passage which has just been read. “When He had said this, after six days He took three disciples, Peter, and James, and John, and went up into a mountain” (Matt 17:1; Luke 9:28.). These three were those” some,” of whom He had said, “There be some here which shall not taste of death, till they see the Son of Man in His kingdom.” There is no small difficulty here. For that mount was not the whole extent of His kingdom. What is a mountain to Him who possesseth the heavens? Which we not only read He doth, but in some sort see it with the eyes of the heart. He calleth that His kingdom, which in many places He calleth the “kingdom of heaven.” Now the kingdom of heaven is the kingdom of the saints. “For the heavens declare the glory of God” (Ps 19:1). And of these heavens it is immediately said in the Psalm, “There is no speech nor language where their voice is not heard. Their sound is gone out through all the earth, and their words unto the end of the world” (Ps 19:3-4). Whose words, but of the heavens? And of the Apostles, and all faithful preachers of the word of God. These heavens therefore shall reign together with Him who made the heavens. Now consider what was done, that this might be made manifest.

2. The Lord Jesus Himself shone bright as the sun; His raiment became white as the snow; and Moses and Elias talked with Him (Matt 17:2-3). Jesus Himself indeed shone as the sun, signifying that “He is the light which lighteth every man that cometh into the world” (Jn 1:9). What this sun is to the eyes of the flesh, that is He to the eyes of the heart; and what that is to the flesh of men, that is He to their hearts. Now His raiment is His Church. For if the raiment be not held together by him who puts it on, it will fall off. Of this raiment, Paul was as it were a sort of last border. For he says himself, “I am the least of the Apostles” (1 Cor 15:9) And in another place, “I am the last of the Apostles.” Now in a garment the border is the last and least part. Wherefore as that woman which suffered from an issue of blood, when she had touched the Lord’s border was made whole (Mk 5:34), so the Church which came from out of the Gentiles, was made whole by the preaching of Paul. What wonder if the Church is signified by white raiment, when you hear the Prophet Isaiah saying, “Though your sins be as scarlet, I will make them white as snow”?(Isa 1:18).  Moses and Elias, that is, the Law and the Prophets, what avail they, except they converse with the Lord? Except they give witness to the Lord, who would read the Law or the Prophets? Mark how briefly the Apostle expresses this; “For by the Law is the knowledge of sin; but now the righteousness of God without the Law is manifested:” behold the sun; “being witnessed by the Law and the Prophets” (Rom 3:20-21), behold the shining of the Sun.

3. Peter sees this, and as a man savouring the things of men says, “Lord, it is good for us to be here” (Matt 17:4) He had been wearied with the multitude, he had found now the mountain’s solitude; there he had Christ the Bread of the soul. What! should he depart thence again to travail and pains, possessed of a holy love to Godward, and thereby of a good conversation? He wished well for himself; and so he added, “If Thou wilt, let us make here three tabernacles; one for Thee, and one for Moses, and one for Elias.” To this the Lord made no answer; but notwithstanding Peter was answered. “For while he yet spake, a bright cloud came, and overshadowed them” (Matt 17:5).  He desired three tabernacles; the heavenly answer showed him that we have One, which human judgment desired to divide. Christ, the Word of God, the Word of God in the Law, the Word in the Prophets. Why, Peter, dost thou seek to divide them? It were more fitting for thee to join them. Thou seekest three; understand that they are but One.

4. As the cloud then overshadowed them, and in a way made one tabernacle for them, “a voice also sounded out of the cloud, which said, This is My beloved Son.” Moses was there; Elias was there; yet it was not said, “These are My beloved sons.” For the Only Son is one thing; adopted sons another. He was singled out in whom the Law and the prophets glorified. “This is My beloved Son, in whom I am well pleased; hear Him!” Because ye have heard Him in the Prophets, and ye have heard Him in the Law. And where have ye not heard Him? “When they heard this, they fell” to the earth. See then in the Church is exhibited to us the Kingdom of God. Here is the Lord, here the Law and the Prophets; but the Lord as the Lord; the Law in Moses, Prophecy in Elias; only they as servants and as ministers. They as vessels: He as the fountain: Moses and the Prophets spake, and wrote; but when they poured out, they were filled from Him.

5. But the Lord stretched out His hand, and raised them as they lay. And then “they saw no man, save Jesus only” (Matt 17:7-8). What does this mean? When the Apostle was being read, you heard, “For now we see through a glass darkly,but then face to face” (1 Cor 13:12). And “tongues shall cease,” when that which we now hope for and believe shall come. In then that they fell to the earth, they signified that we die, for it was said to the flesh, “Earth thou art, and unto earth shalt thou return (Gen 3:19, LXX) But when the Lord raised them up, He signified the resurrection. After the resurrection, what is the Law to thee? what Prophecy? Therefore neither Moses nor Elias is seen. He only remaineth to thee, “Who in the beginning was the Word, and the Word was with God, and the Word was God” (Jn 1:1). He remaineth to thee, “that God may be all in all.” Moses will be there; but now no more the Law. We shall see Elias there too; but now no more the Prophet. For the Law and the Prophets have only given witness to Christ, that it behoved Him to suffer, and to rise again from the dead the third day, and to enter into His glory. And in this glory is fulfilled what He hath promised to them that love Him, “He that loveth Me shall be loved of My Father, and I will love him” (Jn 14:21). And as if it were said, What wilt Thou give him, seeing Thou wilt love him? “And I will manifest Myself unto him.” Great gift! great promise! God doth not reserve for thee as a reward anything of His own, but Himself. O thou covetous one; why doth not what Christ promiseth suffice thee? Thou dost seem to thyself to be rich; yet if thou have not God, what hast thou? Another is poor, yet if he hath God, what hath he not?

6. Come down, Peter: thou wast desiring to rest on the mount; come down, “preach the word, be instant in season, out of season, reprove, rebuke, exhort with all longsuffering and doctrine” (2 Tim 4:2). Endure, labour hard, bear thy measure of torture; that thou mayest possess what is meant by the white raiment of the Lord, through the brightness and the beauty of an upright labouring in charity. For when the Apostle was being read we heard in praise of charity, “She seeketh not her own (1 Cor 13:5).  She seeketh not her own;” since she gives what she possesses. In another place there is more danger in the expression, if you do not understand it right. For the Apostle, charging the faithful members of Christ after this rule of charity, says, “Let no man seek his own, but another’s” (1 Cor 10:24). For on hearing this, covetousness is ready with its deceits, that in a matter of business under pretence of seeking another’s, it may defraud a man, and so, “seek not his own, but another’s.” But let covetousness restrain itself, let justice come forth; so let us hear and understand. It is to charity that it is said, “Let no man seek his own, but another’s.” Now, O thou covetous one, if thou wilt still resist, and twist the precept rather to this point, that thou shouldest covet what is another’s; then lose what is thine own. But as I know thee weIl, thou dost wish to have both thine own and another’s. Thou wilt commit fraud that thou mayest have what is another’s; submit then to robbery that thou mayest lose thine own. Thou dost not wish to seek thine own, but then thou takest away what is another’s. Now this if thou do, thou doest not well. Hear and listen, thou covetous one: the Apostle explains to thee in another place more clearly this that he said, “Let no man seek his own, but another’s.” He says of himself, “Not seeking mine own profit, but the profit of many, that they may be saved” (1 Cor 10:33).  This Peter understood not yet when he desired to live on the mount with Christ. He was reserving this for thee, Peter, after death. But now He saith Himself, “Come down, to labour in the earth; in the earth to serve, to be despised, and crucified in the earth. The Life came down, that He might be slain; the Bread came down, that He might hunger; the Way came down, that life might be wearied in the way; the Fountain came down, that He might thirst; and dost thou refuse to labour? `Seek not thine own.’ Have charity, preach the truth; so shall thou come to eternity, where thou shalt find security.” + 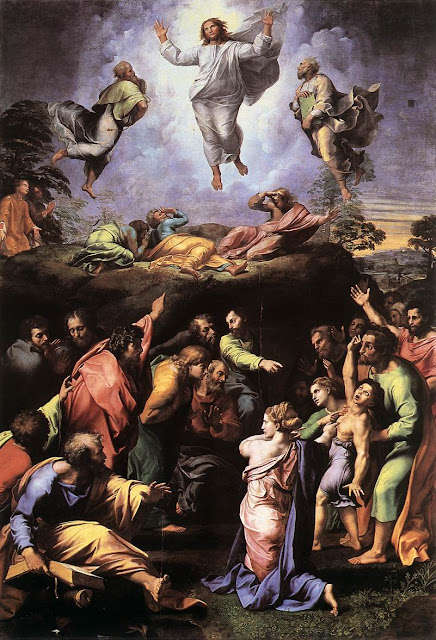 The Transfiguration, by Raffaello Sanzio.
Oil on wood, 1518-20; Pinacoteca, Vatican.
Posted by Thomas Yonan at 3:42 AM 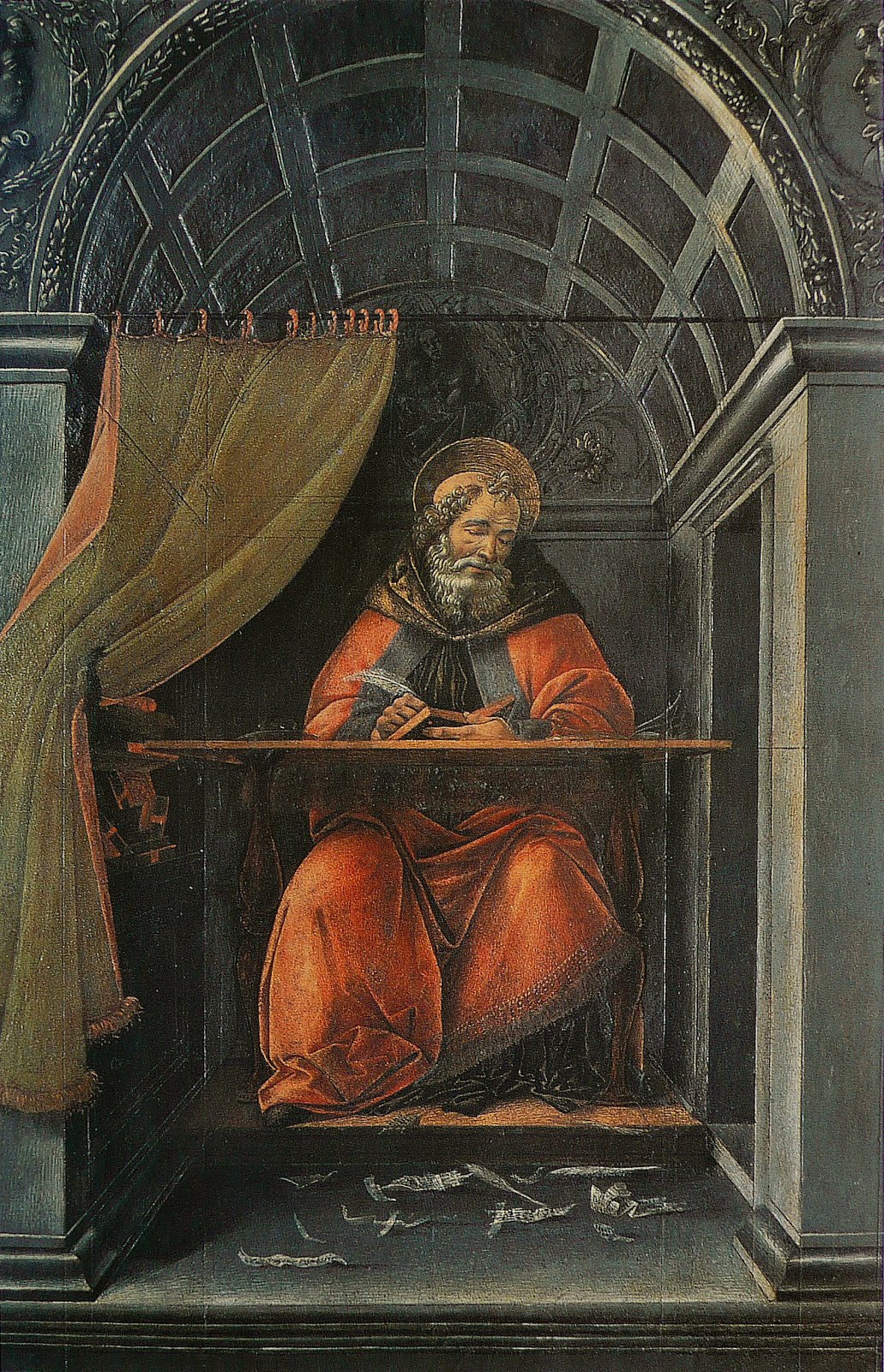